SandMark: A Tool for the Study of Software Protection Algorithms

Christian Collberg
Department of Computer Science
The University of Arizona 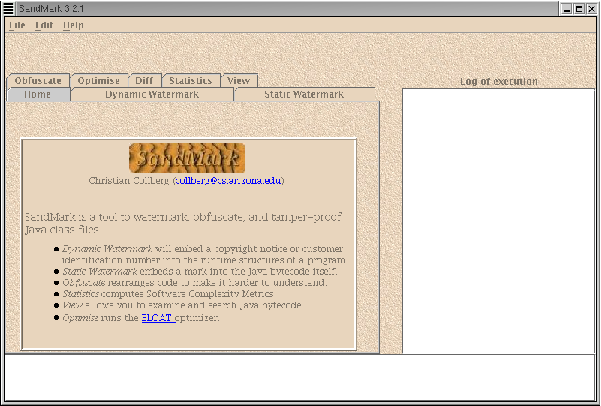 SandMark is a tool developed at the University of Arizona for software watermarking, tamper-proofing, and code obfuscation of Java bytecode. The ultimate goal of the project is to implement and study the effectiveness of all known software protection algorithms. Currently, the tool incorporates several dynamic and static watermarking algorithms (such as those proposed by Venkatesan, Collberg, Stern, and others), a large collection of obfuscation algorithms, a code optimizer, and tools for viewing and analyzing Java bytecode.

SandMark is designed to be simple to use. A graphical user interface allows novices to easily try out watermarking and obfuscation algorithms. Algorithms can be combined, the resulting watermarked and/or obfuscated code can be examined, and attacks can be easily launched. SandMark has been designed using a plugin-style architecture which makes it easy to extend with additional algorithms.

We are currently using SandMark to study which software watermarking algorithms are vulnerable to which code optimizations and code obfuscations. We are also interested in evaluating the effectiveness and performance overhead of obfuscation algorithms.

The following people have contributed to SandMark:

Contact: sandmark-users
Department of Computer Science, The University of Arizona